Not that he needs an excuse to get out there, but armed with our latest new calls, ProStaffer Craig set off into the cold Welsh hills to see what he could attract…

At around 7pm last night I was at my parents visiting them and the temperature dropped below zero, it froze that hard two hours later I was scraping the ice off the windscreen of the Land Rover. Whilst scraping away I knew it would be a good night for calling in old Charlie so rang Ben and told him we’re off out… It’s very rare he says no but this time it happened. Somewhat bemused I drove home. En route, I was thinking that I’d knock the idea of going out on the head – the moon was so bright it was casting a shadow on the road as I drove by which put me off the idea even more. 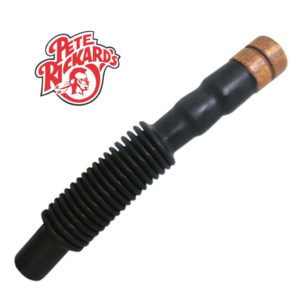 I was down at Rob’s a couple of days before hand as the new callers arrived from the States – it wasn’t long before a couple of them were in my bag ready for testing.

I talked myself into going out by myself as I had all the gear to do so. I knew walking wasn’t going to be an option due to the bright moon so it would have to be a sit and wait. It wasn’t long before I arrived home and got all the gear ready.

15 minutes later I was back in the Landy and on route to my first permission. The fields looked white due to the heavy frosts and clear skies and I knew I had to hide myself well. There was a very slight breeze blowing left to right across the field so my position would have to be out on the right. Some overhanging trees created a fantastic backdrop for me and the motor. Once in position I walked out to see how hidden the car was, perfect couldn’t see it at all.

The hatch had already been taken off back at home so I climbed in and made myself at home. With rifle ready – and safety on I looked through my scope and could see most of the field without a light. On top of the scope was my Night Master Green Envy with the Xsearcher head on it. I use Night Masters quick release mount that’s fully adjustable and is so much better than the standard clamp, worth every penny. With the rifle ready to go on the roof I started to call softly with the new caller – the Scotch Shaker Predator Caller.

10 minutes later and nothing had shown itself so I sat back down and rolled myself a ciggy to have with a brew I’d fetched with me. I couldn’t believe how still everything was, the breeze had gone completely now which buggered me up a little. The stars were amazing I found myself staring at them for a long time and several shot across the clear skies leaving a light trail as they burnt out.

Tea break over, I started to call once more. About 400 yards in front lay a bed of rushes and out behind that a massive wood. Within seconds of calling a set of eyes sat just in front of the rushes. I turned off the 170 and kept calling gently. I turned the light back on and it had come closer and as I swapped over onto the little mouse squeaker those eyes started bounding in. I lay the rifle down on the bonnet bag and switched on the green Envy XSearcher. Finding my target in the scope, I got a positive ID and as I watched it come closer I noticed another set of eyes closing in pretty quick.

The new mouse squeaker is only a small caller and I had no problems operating it in my hand whist holding my rifle. The first fox was now about 50 yards away and the other one was probably about 230-240 and was now sat on its bum watching me. Once I had a full ID on both foxes I placed my cross on the bottom of the furthest ones neck, I brought my head off the stock to see where the closest one was and Christ it was now about 30 yards away and closing fast. My head was quickly back on the stock and the first round was soon on its way over the frozen grass and connecting with my first victim. I quickly located the second fox which was now roughly 60-70 yards away and running flat out away from me. I promptly had the cross on it and it was motoring. A sharp “Oiiiiiiii” and she stopped broad sideways and she soon hit the deck as my second round passed through her chest cavity. I carried on calling for another 10 minutes or so but nothing showed. Collecting the dead, I paced out the furthest one to roughly 260 and the closest one to 120. 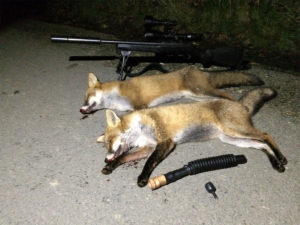 My gear was soon packed away and I was on route to my next spot where I once again parked under some trees on the track which provided me with cover. I walked out into the field to check my position and all was good. I was soon calling again with the “Scotch Shaker” and within seconds I had a set of eyes bouncing in towards me. Normally I wouldn’t dream of swapping calls if one is currently bringing a fox in but the Scotch Shaker is quite loud – and to be honest, I’ve not mastered the art of using it in a subtle manner. Swapping to the small mouse squeaker made no difference what so ever and this steam train was still on route.

Again the XSearcher was on and my cross was following the fox in. I stopped calling when the fox got in to about 120-130 yard mark and waited till it got slightly closer before letting a little dog bark out and sending my third round of the night straight at it dropping him to the floor. I stayed for another hour calling but nothing showed itself.

I’ve never really been a fan of solo foxing but last night was perfect. I was at home in the silence of nature – It was fox versus me. I had to do everything right and I had nobody else to blame if I cocked up. On route home I felt proud of myself that a good job had been done and felt like patting myself on the back. The one downside of being out by yourself was that I couldn’t share the experience with anyone but hey ho I’m sure Ben will be out with me next time. 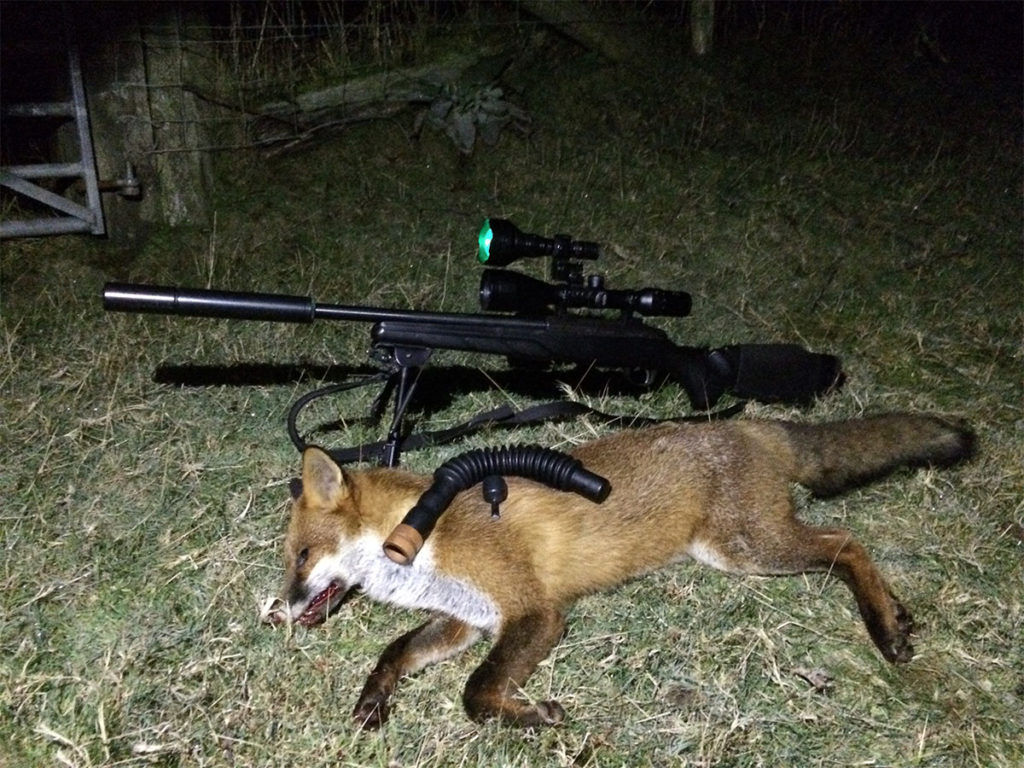