BFC ProStaffer, Craig Jackson tells us of a tricky night…

The other half told me she was working till 10pm and then going out for a couple of drinks afterwards for a colleague’s hen doo. Not long after she’d told me this My partner in crime Ben asked me if I fancied an hour or so on the geese, well put it this way I didn’t need asking twice… I mentioned a quick lamping session afterwards and surprise surprise like me he didn’t need asking twice either.

So with the night planned we set off down to a new permission with a small lake on to which we’ve shot a few geese on the week before. It was one of those nights where you’re really excited and planned a big bag full and nothing shows up bar a duck that I couldn’t resist on dropping. The goose shooting was soon wrapped up and a Chinese was ordered.

Back on the road after a quick scoff we were on route to a permission we’ve had for years with a very small population of foxes but we never give up on the place as now and again we do bag a couple. We actually visited the farm the week before and shot a Charlie but soon upset the cattle which ended the night very quickly but this time we had a plan!

We pulled up and parked the truck by the barn, loaded up and walked as quietly as we could down the track past the cattle and over the railway onto a decent 100 acre field if not bigger to be honest. I was on the rifle and Ben was on the lamp and feeling very confident Ben softly started to call. I placed my rifle down on the floor and just as I was getting up the first fox of the night was bounding across the field straight at us, I dropped to the deck and soon had the eyes in the scope and at this point it started quartering out to the right in the one direction we didn’t want to see a fox as there was a ridge that runs directly across us which would produce a no shot scenario. So getting a bit disheartened with this fox as it was only 150 yards away and not being able to see it off the deck I was then told that the fox was now heading left again but away from us as it was now chasing a rabbit across the wheat stubble. It soon disappeared out of sight and I was gutted but that feeling soon disappeared like the fox as ben said there was another one out to our left about the 250-300 yard mark and slowly coming in. After a quick shuffle and a readjustment I soon had it in the scope and with a quick adjustment on my Meopta ZD scope I now had a 250 yard zero and this fox was well on the way to meeting my bullet. Ben whispered are you ready as he was using his T20 red light and I can’t shoot in the red to save my life (fantastic for spotting but I just don’t seem to be able to focus in it) so he had the nod and he swapped over to his T20 white with a doubler and bingo ID was had and as soon as my finger started to squeeze that trigger the fox turned and ran faster than Usain Bolt directly away from us, It was too far to try and stop it for a quick shot and we let it go.

This was turning into one of those nights! We called for another 15 minutes or so and with a few flashes here and there around the field (far end of the field had stubble turnips in which was holding the foxes) we decided to retreat off the field. As we came over the railway I decided to have a quick shine in the cattle field just to see if the cattle were in there and low and behold a great big pair of shiny eyes was staring straight at us and as I’m sure you’ve guessed they belonged to the third fox of the night. No chance of getting a shot from where we were and we still didn’t know where the cattle were. The light was quickly turned off and we walked 150 yards up the track to the other end of the field and shone back down and surprisingly the fox was still there but so were the cattle… Only difference this time was that the cattle were all laying down and didn’t seem bothered at all, so with a quick look in the scope I got the ID on Charlie and looked over at the cows and realised that this was a different heard of cattle and these were young bullocks and the ones last time had been milkers but still not wanting to risk it we decided to try and call it in to our end of the field but the fox was having none of it and once again we retreated.

Back at the truck now and as I’m sure you all know the feeling, the morale was low. Excuse my French but these foxes really pissed me off and I wasn’t going to be beaten. After a lot of persuading I finally got Ben to drive down the track and onto the big field where we spotted the first few foxes, I’m now standing on the back of the truck with the rifle on the roof and the fox mating call blasting out on volume 3 on the GC500, I’m scanning in the red again and BINGO a fox appeared from the exact same location as the second fox of the night had disappeared. As the fox gingerly came towards us Ben put the lightforce 210 variable on it on a very low setting so all I could see was a pair of golden coins still wondering towards us. I gave a good tap on the roof to say I was ready and Ben turned the power up on the lamp and it did exactly what It did before and turned and took off, I whistled loudly and Ben let out a bark and the fox turned perfectly and my 80gn nosler home load was on its way to meet its victim. Ben didn’t see the fox drop but he didn’t need to ask me as the good solid whomp noise came back and greeted our ears and he knew it was down. 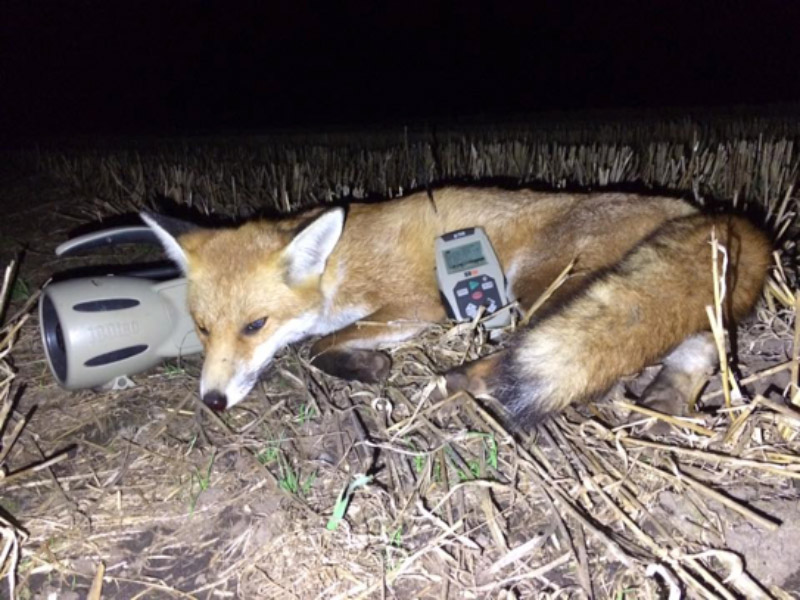 It certainly wasn’t the longest shot we’d ever taken but we ranged it with the range finder to a good solid 200 yards but we worked well as a team and got our result. It was a challenging night but our hard work paid off and it felt good! So with a good team and decent equipment our night was rewarded with a lovely looking vixen. After a few pictures were taken the rifle put away we returned home in time for me to meet the better half and have a sneaky pint.