The Best Fox Call ProStaff team have hit the road again – this time heading south to meet up with professional pest controller, Tim Lester of MBC Bird and Pest Solutions in Dorset to capture some foxing footage for GetFoxedTV

Before heading south, Rob and Craig met at the Birmingham Headquarters of Hunting / Shooting clothing manufacturers, Shooter King to discuss possible sponsorship. Following a very productive meeting – and kitted out some new clothing to trial they set off to Herefordshire for another meeting. By 4 o’clock the work was done so the boys hit the road for a three and a half hour drive down to Tim’s.

On arriving in Dorset, just outside of Poole, the kit was transferred to Tim’s Motor, the police were notified and they were on route for a golf course that Tim regularly shoots over. On the journey to the course, Tim explained that he’d been shooting the course for about 18 months and that on the first two visits, he’d taken 31 foxes and that the total tally was now in excess of 150… The night was looking promising!

Within 30 seconds of Craig leaving, Rob and Tim heard him give a quick squeak and BOOM. He quickly returned with a huge smile on his face carrying the first fox of the night. One down!

It wasn’t long before Tim had spotted another fox. Craig took over on the camera and Rob got down on the rifle – his Tikka T3 Lite shooting 53grn Vmax homeloads. BOOM and the second fox of the night fell and was caught nicely on film. Two down!

Jumping back in the truck, the boys drove to another part of the course and Craig spotted a Roe doe and fawn about 200 yards away on a treeline. He piped on the Best Fox Call Original with some single squeals to gauge their reaction and as he did a fox popped up to the left of us. Using a handy tree as a rest, Tim quickly dispatched that at around 90 yards… Three down!

Tim took the lads over the road onto the second side of the course and it wasn’t long before another fox was spotted. Craig got down on the rifle but couldn’t get a clear ID – the eyes started to move right but still no clear ID. Having moved to a better vantage point, the eyes were confirmed to be fox but Craig still couldn’t get a safe shot away so a third position was taken – this time at the top of the driving range. Scanning with the Green Nightmaster showed the fox at about 20-30 yards away but he knew things weren’t right. Rob gave him a couple of blasts of the SS and he turned for a quick look but no joy – he was heading for the hills. Rob continued to call and as Tim came around with the lamp, another set of eyes appeared at about 200 yards down range and closing fast. Craig got down on the deck once again and pulled the trigger. No need for a range finder as he dropped level with the 175 yard marker on the Driving Range! Four Down!

Tim explained that he had a couple of foxes that needed tidying up on his shoot so at around the boys jumped back in the truck and about half hour arrived at the new location. It wasn’t long before a set of eyes were spotted on a stubble field. As Tim got the rifle on the bonnet the fox took off but quick bark the fox stopped perfectly. BOOM! A cracking 200 yard plus shot and the fox was down to Tim’s 243. Five Down! 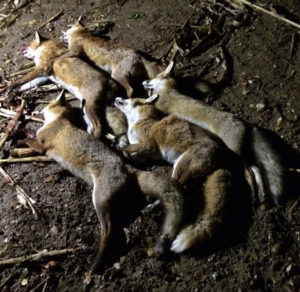 The next couple of hours were spent driving the 700 acre ground – several times – and whilst spotting plenty of Roe deer there were no foxes to be seen. 4am arrived and so did the rain so trio packed up all the gear, took a few photos and headed off back to Tim’s.

A cracking night had by all – Thanks Tim!

If you’re looking for a reliable Pest Controller in the Poole, Portsmouth, Bournemouth or Southampton area, you can contact Tim via his website at www.lesterbirdandpest.co.uk

We use cookies on our website to give you the most relevant experience by remembering your preferences and repeat visits. By clicking “Accept All”, you consent to the use of ALL the cookies. However, you may visit "Cookie Settings" to provide a controlled consent.
Cookie SettingsAccept All
Manage consent