In September 2021, after an extended period of being unable to travel to the Isle of Skye, I was lucky to be able to head north to squeeze in a couple of days on the hill with Scott MacKenzie – Skye Gamekeeper at Fearann Eilean Iarmain on the Isle of Skye.

After a 506 mile trip on the Sunday, and a good nights sleep at Hotel Eilean Iarmain I awoke to a stunning sunrise… 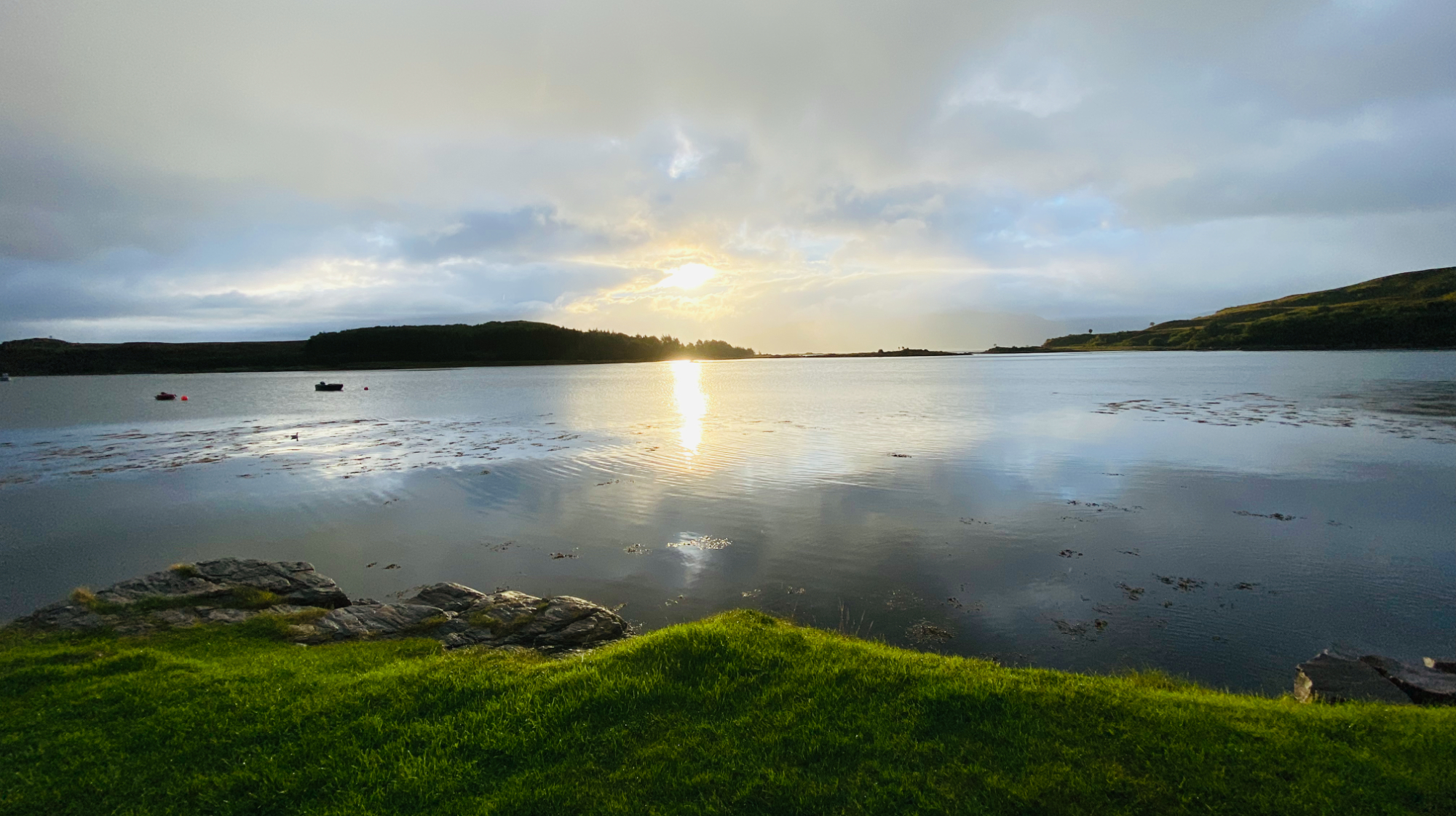 Following a meeting at the estate throughout Monday, Scott and I headed out early Tuesday morning to try and find a suitable cull stag as part of the estates deer management plan.

As you would probably suspect, the weather was “damp” but not to be deterred, Scott and I headed out to see what we could find.

But first, check zero on the 270 at the range – a good habit as you never know what 500+ miles in the back of the truck can do. Two shots later and all was good, so we hooked up the trailer and argocat and headed off towards Ord to see what we could see.

You’ll have to forgive my geographical descriptions / Gaelic spelling as I’ve still not quite got to grips with all the lovely Gaelic names for the various ridges and glens.

After a few trips up and down Glen Ord, we had spotted a few groups of hinds – and settled on stalking into a group where there were two stags – but at that stage we could not be certain either would be a suitable cull beast.

Parking up, we set off south on foot, into Chrosabhaig, to higher ground. The wind was blowing at around 40mph – the rain was horizontal – but at least it was warm rain and it kept the midges at bay… All part of the charm!

Reaching the first summit, we realised it was going to tricky as there was an abundance of sheep on the hill – all taking advantage of the shelter on our side of the hill and we were conscious that they could bump the deer as we progressed. After about an hour, we reached the point where the group of beasts we lay up, and discovered they’d moved on – almost certainly disturbed by the sheep. Pressing on, we saw the group again and formulated a plan – but once again, the sheep blew our cover and the deer moved on again. 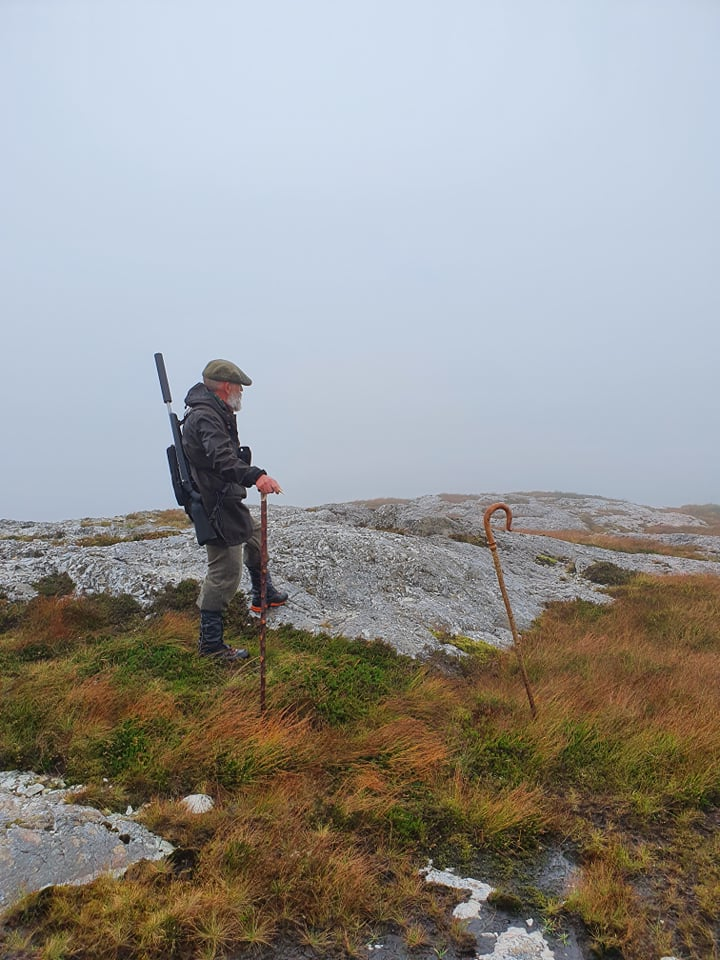 The higher we got, the harder it rained and the stronger the wind blew and by about 3pm we were at about 800ft – and visibility was down to about 40 yards. We were engulfed by cloud (and rain!) and made the decision that our only option was to head back down. We’d seen a lot of beasts but were beaten by the clouds (and the sheep!)

On the walk back down to the truck we did see a stunning stag, holding hinds high on Meall Da bhien – silhouetted against the cloudy sky… What an amazing sight!

No less a sight was watching the estate’s resident eagles soaring above the ridges – and the wealth of snipe getting up and darting off as we made our way through the heather.

Heading back north to Scott’s house, we discussed plans for the following day – and of course stopped off for some liquid refreshment in the form of Scotlands finest produce. Boots and clothing hung to dry around the range, we settled into a wee dram (not just the one) and had a good catch up.

Wednesday’s weather was forecast as heavy rain – but driving down from the north of the island, it was a) not raining too hard and b) the air was clearer so we had high hopes. After a quick drive down to the bay at Ord we decided we’d be better off concentrating on the bit of ground below Cnoc a Chaise Mhoir – so parked the truck and argocat and set off on foot.

Walking the edge of the forestry, we soon spotted a group of 8 stags so decided to stalk in for a closer look.

After watching the beasts for 15 minutes, Scott had a plan – which was then immediately scuppered by the appearance of single hind that was feeding across where we wanted to go – so plan B kicked in – Working the wind and ground, we decided it would be best to drop down into the forestry and follow that through to cover some ground without being seen.

Whilst walking the forestry I heard my first Skye Red Roar – what an amazing sound that is! Deep in the forestry it was hard to know exactly where he was – but he was close – and certainly made his presence felt!

The stealthy approach through the forestry paid off and we managed to get within a few hundred yards of the group of stags – close enough for Scott to identify a suitable cull animal. Dropping onto some lower ground, we managed to get in to about 160 yards of the group – so waited til they were settled – and then crawled up to get to a suitable shooting position… The lie of the land proved tricky – with a wide flat plateau, populated by clumps of heather between us and the group but after about 30 mins of crawling / spotting we found a spot where we could see – and get a shot….

The challenge then was the rain – every cloth we had to dry / clean scopes was sodden – so looking through my scope at a beast at 160 yards was like looking through a tube of water!

After a lot of wiping I finally managed to get a clear sight picture – and steady shot. Thinking back to the zero check the day before, I was confident of a clean, humane shot – and gently squeezed the trigger. Our chosen beast dropped on the spot and the rest of the group slowly got up and moved on, calmly over the hill.

I think it was at that point that I realised just how wet I was – but as I’m sure you’ll appreciate, in that moment, you just don’t care!

Two hard wet days – but what an amazing result – and a truly wonderful experience.

I’m always in awe of Scott’s knowledge of the ground – and his beasts and I’m sure I soak up his knowledge almost as much as the water on the hill. I know some people don’t buy into the idea of guided stalking – but Scott’s expertise means the experience is far more rewarding than being out on your own. 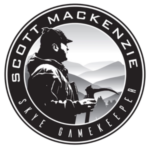 If you’d like more information about stalking at Fearann Eilean Iarmain on the Isle of Skye, then have a look at Scott’s website (Scott MacKenzie – Skye Gamekeeper) where you’ll find information about all of the activities available at FEI. These include Red Deer Stalking, Roe Deer Stalking, Simulated Stalking, Clay Shooting, Fishing, Wildlife Walks and Argocat Tours – and of course, tasting sessions of the Estates own Whisky and Gin!

I’m now counting down the days til November when I’ll be back on the Isle on the hinds!

We use cookies on our website to give you the most relevant experience by remembering your preferences and repeat visits. By clicking “Accept All”, you consent to the use of ALL the cookies. However, you may visit "Cookie Settings" to provide a controlled consent.
Cookie SettingsAccept All
Manage consent