The question went something like “Fancy a day-time foxing session..?” I didn’t need asking twice!

Mid morning on Friday May 30th I set off from Herefordshire for the hills to the west of Oswestry to meet up with Craig. Craig had identified a promising looking spot where he’d been spotting foxes on the lamp and the plan was to go and see if we could call a couple out during daylight. A couple of hours of fighting traffic on the A49 / A5 later I arrived at Craig’s and we formulated a plan over a cuppa and then headed off to our first venue to check zeros. 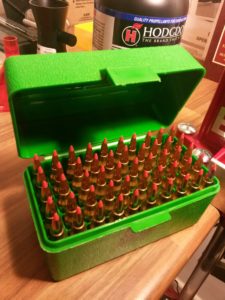 I’ve recently started reloading for the 223 and had reached a point where I had formulated a load that was consistent and printing 1/2″ groups at 100 yards – good enough for me – all I needed to do was to get them shooting in the right place. We set our target out at 100 yards and took a couple of shots – as I suspected, I was shooting high and left and so after a couple of clicks and a couple more shots, I was happy the 223 was hitting at an inch high at 100 yards and travelling at around 3100fps. Perfect for anything between 30 and 200 yards.

Noticing a bit of a grin on Craig’s face I enquired what he was feeling pleased about…? He turned and pointed to a small rise in the field – around 200 – 250 yards behind us… “You want to try a few from back there…?” he asked. Didn’t need a second invite!

A quick drive across the field in the landy and we were at a suitable spot – checked with the rangefinder which told us the target was now a modest 338 yards – this was going to be a challenge. I’m a big fan of uncluttered scopes – a simple 30/30 ret does the trick for me and I currently use Redfield scopes on all three rifles. With superb light transfer and very clear optics, I love these scopes for foxing as they make target acquisition and identification simple and quick and are great for low light shooting. They are however not designed for long range shooting as they have no mildots or other aiming points – and no fancy ballistic turrets…

I was going to have to aim off – and see what happened. Strelok told me that at 340 yards, my POI would be 11.9 inches low – so after a bit of mental calculation I guesstimated where I ought to be aiming.

Gently squeezed a first shot away to be rewarded with the unmistakable sound of bullet on metal gong – pleased was an understatement. Better try again though. Shot two left the barrel and sure enough hit the target. Craig meanwhile had also taken two shots with the 243 and hit home with both. Needless to say, we were both feeling a little smug at this point – four shots – four hits!

Whilst heading back to the target I smugly mentioned to Craig that I’d be disappointed if I’d not managed an inch group. As we approached the target, something looked odd. The target in question was a prototype version of our new gong targets (click here) – a mild steel fox head welded to a 1″ angle iron stake and subsequently pushed into the soft welsh hillside.

About 3″ below Charlie’s nose was a damaged area of the stake – I’d miscalculated the drop / aim point and was shooting low… That said – on closer inspection, both shots were level – and less than an inch apart. Pretty good grouping for the home loads even if say so myself!

Time to find a fox…

Happy that both rifles were on zero we headed out to a remote spot somewhere up in the hills. Having decided on a suitable shooting position overlooking a gorse / reed filled gully across a valley, Craig set off on foot to place the GC500 out on a grass bank at around 180 yards. A quick test proved the caller was responding well and so Craig returned.

Starting with a rabbit distress call we waited patiently for any sign of Charlie but he was either not around – or simply not hungry and after a patient hour and a half we decided to change tactics. Not until Craig had done his bit to reduce the rabbit population with two cracking headshots at 230 and 240 yards!

Plan B involved food – then unbolting the roof hatch on the Defender and heading out to cover some of the tens of thousands of acres Craig shoots over – it was shaping up to be a late one! At 10ish we were joined by Craig’s regular lamping partner, Ben and as darkness fell over the Welsh hills, we headed off into the night armed with various calibres – and a few gallons of “fakey wakey” -like Red Bull, but a fraction of the cost!

With Ben at the wheel and Craig and I “out back” we shone out into the vast countryside and, as if on cue, a lampshy fox showed itself then turned tail and made away into the treeline – that’s one fox that’s going to take some catching up with but I don’t doubt that sooner or later these boys will get the better of it. The Defender has been modded especially for foxing – big wheels and tyres for ground clearance, a custom “hatch” through the roof, enough lights to see Liverpool and plenty of power outlets for various lamps. After another 20 minutes or so Craig spotted a flash of eyeshine high up on a grass bank so we headed off road to try and locate the offender. After carefully negotiating a wet grass bank – and having seen nothing but a few rabbits, we headed back down towards the road and sat tight by the road were eyes…

Initially unresponsive to any call, the owner of these eyes sat tight – and after some teasing from Craig (a combination of the BFC SS, the Original and the palm of his hand) the eyes slowly moved towards us. I’m a big believer in if I can’t ID what I’m looking at – then I don’t shoot and something was not quite right… Whatever these “eyes” belonged to was certainly very foxy – but the colour was very dark – and very red… Not what I would expect to be seeing… I made this clear to Craig and he wound the brightness up on the 170 – and almost immediately, the “eyes” turned broadside and made for the fenceline on the road – 100% fox – 100% not a safe shot as it was on the road… Damn it!

Ben negotiated back down the road and we lamped into the field opposite and sure enough, in the middle of the field at around 120 yards was the same fox – trotting away from us. The far edge of the field was around 160-180 yards. Relying on Charlie’s almost habitual “one last look” I kept him in the scope ready for a quick shot once he’d almost made cover… As he approached the edge of the field I was ready for the shot only for Charlie to carry on – didn’t stop to look back – and (as Craig would say) there he was… Gone!

Back to where we started

We then headed back to where we had been zeroing earlier in the day and, on entering the field, Craig and I spotted a distinct flash up on a bank where there were no sheep – whatever it was up there, it didn’t belong to the farmer so we shut the engine off and called to try and spot the eyes again. Every so often we’d get a flash until finally, the fox presented itself around 120 yards away on a steep bank. She was sat tight on level ridge and presented a pretty easy shot… Craig wound the lamp up to 80% and with cross hairs on her snout, I squeezed the trigger to send a 53gr Vmax in her direction. A resounding “whump” (how do you spell that noise..?) and lights out suggested she was down – and Craig – ever the gentleman – offered to head up the hill to find her.

A few minutes later – and with a sweat on – Craig returned, vixen in hand and the 223 homeloads had claimed their first kill. A clean hit to the neck had dropped the vixen clinically and humanely and she was lay exactly where she had been shot. A good result all round.

Time to move on… The 223 was packed away and the baton passed to Craig who was shooting 55gn Vmax through his 243 – all we needed was a fox… Sadly this proved more difficult than we’d anticipated and at around 3.45am we had to concede to the rising sun – Good light stopped play – and so headed back to base. 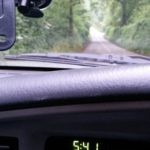 After the usual banter and farewells, I headed back down to “sunny” Herefordshire and pulled onto the drive at 5.42am – I’m sure I remembered telling Craig sometime during the previous day that I didn’t want an overly late one – I guess he figured that quarter to six was an early one!