Craig’s back on the road again but this time he’s local on his own ground in North Wales near Wrexham – accompanied by his usual shooting partner, Ben.

Craig and Ben met up at Craig’s parents farm and transferred all the gear into the Landy and with the hatch roof removed, they set off to their first permission, a freshly cut maize field. Ben was “batting” first so he climbed into the back of the Landy and got his rifle ready. Ben was using his Remington 700 with a Boyds stock in .243 and a Millet 35mm scope on top. With the rifle on the roof Craig started to call. Ben had the lamp out the roof and was sweeping the field with the 170 on it’s dimmest setting. Up ahead was a bank that led up to a hedge which was probably 80 yards away. Out to the right was a wood situated roughly 170 yards away. After 45 minutes and not a sign it was time for pastures new so Craig and Ben packed all the gear up and moved on.

The next permission was a pheasant shoot, Craig and Ben cover. This particular field had produced 5 foxes in the last few weeks and on the last visit two foxes had been spotted but only one was shot. That meant there was one left and Craig was pretty keen to “get it gone”. Craig pulled the Land Rover up to the entrance gate and as Ben was still “at the crease” he once again he climbed into the back. They slowly drove down the field with the vehicle lights completely off and only the faintest glow coming from the lamp Ben searched the field. Nothing… Driving steadily on, and through a gate into a huge field with woodland on the left and right and about 250 yards between them. About 400 yards ahead a gulley ran straight across the field and Craig knew that’s where the foxes usually come from. Craig positioned the Landy in a good vantage point and Ben walked the GC500 caller out to about 75 yards – towards the gulley.

With the fox mating call gently playing on volume 3 Ben took position out of the roof.An hour later nothing had shown itself. Ben was now sat down in the back and Craig now and again would shine his NM800 XSearcher (with a green envy LED) around and after another 20 minutes there was still nothing. God know how many roll ups had been smoked!

Anyone who knows – or has been foxing with Craig knows he’s not one to give up. “We’ll give it 5 minutes” he said to Ben “then we’ll decide where to go next”. Every call had been tried on the caller and nothing seemed interested. They decided to put the mating call on once more. The lads decided where they were going to go next. They couldn’t go where Craig really wanted to go as it was about 1am already and it was a “school night” and it was a 30 minute drive from where they were now. Craig shone the light around for that last chance of seeing something and BINGO.

50 yards away from them out to the right was Charlie heading straight for the GC500. Ben had the cross on the fox as it strolled down towards the caller. As soon as the fox stopped Ben sent a 75g Vmax lead pill straight through its shoulders. The patience (some may say stubbornness / Obsession) had paid off!

It was now Craig’s turn to bat. They went around a few more fields to which 3 more foxes had been spotted but no shots taken for one reason or another.
Time for home… As they approached Craig’s folks farm, Craig stopped the Landy to have a quick scan over the fields next to his mum’s chicken coop.

FLASH 2 sets of eyes. Knowing there was no possible shot they retreated around the back to the next field where Ben positioned the Landy perfectly and Craig started to call. Within seconds a set of eyes came bounding down the field to which a 55g .243 bullet met its chest front on. 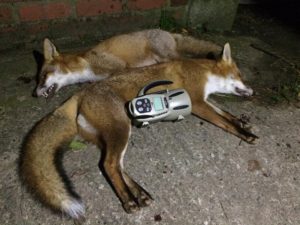 The second fox was never spotted.

So it was a short journey back to the farm where all the gear was transferred back into the other cars and following a quick yarn and a hand shake, the boys were on their separate journeys home.